There is a lecture series at the University of Washington called, "Failing Forward."  My friend & boss, Lesle Gallimore, was a guest speaker and I followed along to see what it was all about.  She was on a panel with various other highly successful, well known adults in our community.
Glowing on the screen in a standing room only auditorium, was each speaker's title while their resume was read by the host; a resume oozing with accomplishments.  When the applause stopped, each speaker pulled out a more personal resume; the resume no one had ever seen, yet the resume that was mostly responsible for each one's success.  Their failure resume.

The room fell into an uncomfortable silence as these well known guests read about how badly they had stumbled in school, their careers, in life.  There is something risky, yet cathartic about showing the whole you; not just the good stuff.   I do think the more you own your failure without pointing elsewhere, or ignoring the issue, it becomes the catalyst for improvement.  Acknowledging, "I wasn't good enough," shouldn't sound so terrifying, but we certainly don't hear it very often.

So.. here it is.  After my 5th excursion with the United States Deaf Women's National Team I was getting pretty cocky.  Assuming I was doing swell picking up new words and phrases in sign language I trotted off to take a test to see just how good I was.  Walked into the office and said 'Hello" to Professor Forshay and the test had officially begun.  He signed some basic questions and the sweat began to glisten on my face.  After the basic questions, he fell into step.  I'm pretty sure he signed something to the effect of:  "Tell me a funny story."  Many shot to my lips ... but zero found their way to my hands.  I stalled and replied with jerky motions, "Do you like sports?"  His reply I translated adeptly, "No."   I tried my best to tell a funny story, on the spot, to a complete stranger, in sign language.  Crickets.   Knowing I was a coach, he followed up with, "Describe soccer, the movement, the style... " I THINK he said something about describing their legs... but that didn't seem right.  AS honestly as I could I replied in 100% fingerspelling, "I don't know how to sign, "legs, movement, style" and that's when it hit me.  I didn't really know how to sign anything in relation to the sport I'm trying to coach. Hence, ... my test.  Kinda embarrassing but I'm tossing it out there for you to see. 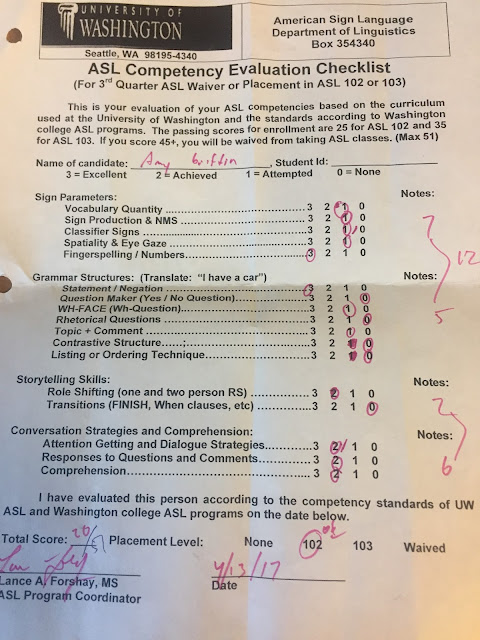 In previous posts I have mentioned how difficult it is for our team to communicate.  Some players sign while others do not.  We always talk about learning and improving, but .... well... that is about as far as it goes.  So, after 30 years of not taking a class... BOOM  ASL 101.

Uncomfortable,  awkward and awesome. Uncomfortable because it took me 3 weeks to realize the syllabus and homework was on "catalyst" and I could find it online.  I was wondering how the hell was able to conveniently slide their homework to the front of the room. The whole time I thought I must have missed her signs during class.

Uncomfortable because my partner was a 7'2" offensive lineman for UW and I'm sure he really enjoyed getting stuck with the ol' lady.

For the record, he was awesome, but I felt at a slight disadvantage due to the fact his hands were the size of Milwaukee.

Awkward because I am shy, hate mingling, and do not like interacting with strangers.. and above all DO NOT enjoy video taping myself as part of an assignment.  No.. am not posting that little gem.
Awesome, because it truly is fun to learn something you know will help.  Awesome because I had a choice to walk into the class the first day or not.  Knowing it would be embarrassing and uncomfortable I walked in anyway.  Uncomfortable seems to be as exhilarating as failing once you make up your mind to just go for it and not worry. It's pretty fun.

I need to post this because the U.S. Deaf Women's National Team has a camp beginning on Thursday, Dec 29-Jan 2nd.  I'm not fluent or smooth.  I don't know how to describe the sport I'm trying to coach with much clarity... but I'm better than I was.  So.. .I am throwing down the gauntlet to our players. Because actions speak louder than words; especially on this team.


I know we are looking forward to regrouping since our camp in Seattle in June.  Last camp our opponents, refs and coaches wore earplugs to gain a new perspective.

Each year players pay to attend camp and we are lucky to get 8 days per year.  Austin, TX here we come!

First Day of Camp for those of you in Austin.  Come on out! We have 3 new players joining us this camp! Yippeee! 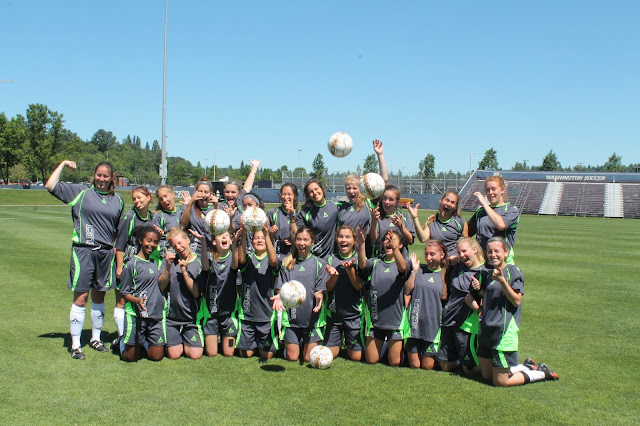 The US Deaf Women's Natl. Team... Training camp vs. Deaflympics 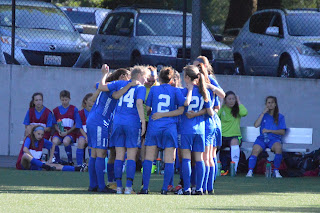 Many months ago, shortly after the U.S. Deaf Women's National Team hoisted the World Championship trophy, there was discussion of the political unrest in Turkey; host of this summer's Deaflympics.  At the time I never thought the best team to compete in an international deaf soccer tournament (28-0-0) would be watching via the internet.

Conversations between the USADSA board members circled round and round until it was decided the US Men's and Women's Soccer Teams would not attend the Deaflympics to be able to ensure the safety and well being of the team.  It wasn't a decision made by the USA Deaf Sports Federation regarding all teams.  Each sport was left to make the decision on it's own. Therefore, volleyball, track and field, golf, swimming & tennis are in Turkey.  Soccer, basketball, handball etc are at home.  In past Deaflympics upwards of 250 American athletes have participated. This year approximately 60 made their way to Turkey. We clearly were not the only ones that stayed home.  The bummer is... I read the news and I'm not so sure USA is as safe as we'd like to believe it should be either.


While I cannot argue when it comes to matters of safety, I have never followed any sporting event with such a heavy heart.   It is difficult for me to imagine how painful it must be for the players sitting at home.   Tough because the World Champions are not participating. Tough because it is a rare occasion this team is able to train, to be together. Tough because it is the biggest stage in the world for deaf athletes. But the biggest dagger of all in my opinion, must be the fact that the players miss out on 2 weeks of being engulfed, immersed & emotionally hooked together with the deaf communities from all over the world.

I am not deaf, but I sensed the joy watching the players be the majority at the 2016 Deaf World Championship.  That it was their world and they weren't trying to adapt to the hearing world that is an every day chore.  Here, everyone simply just "gets it."  It was one sport, and a smattering of families and I thought it was an incredible atmosphere; one that the players on our team rarely experience.  Almost all of the players play for coaches and players that are hearing.
The Deaflympics is over 3500 athletes, plus their friends and family and fans, lots of fans.  Yes, sports enthusiasts and a deaf fan club that want to cheer, support and watch their heroes fight for gold.  From what I understand, it is the Deaf World Championship X 100.  Following the results of Russia, Poland, England, etc... teams we beat comfortably, while we watch from the sidelines 6,000 miles away.

In addition to being bummed for the players, as a coach I see the missed opportunity to improve as a team.  Recently the US DWNT had a training camp in Seattle (more to follow).  The growth between Day 1 and Day 4 is amazing.  New players join the team, veterans swoop them up with open arms, new ways to communicate occurs and great soccer breaks out... but it does take time. But the first day usually is chaos due to lack of time together, new players and an age difference of over 20 years.

Due to players having to pay for their own training camps, we keep them short and as cost effective as possible.  A chance to train together, develop, learn, grow and improve for 3 weeks at the Deaflympics would have catapulted our team onto a higher playing ground for sure.  With the addition of some young players to add to the pool of seasoned veterans, we would have LOVED for the world to watch us in action.  New and improved to say the least.

Instead, we hit Seattle for a training camp.  It was our staff's goal to 1) Improve 2) Create awareness bout the team and its successes. (to grow our player pool & find a sponsor)  3) Pay it Forward and 4)Have Fun. As much as we knew our hearts would ache missing the Deaflympics... the training camp in Seattle filled a void in a very big way.  Any chance to be together and compete is cherished. As we follow from afar we do want to wish the competitors in Samsun, Turkey all of the best!  But please know... we will be ready for the next competition.

On a side note, Beth Barbiers  one of the newer members of the player pool has managed to run herself to the Deaflympics.  She will be running the marathon and the 10,000 meters.  Go Beth!

I know a 'blog' is supposed to be current news.  The US Deaf WNT training camp held at the end of June was fantastic and the next post will have the scoop,  but wanted to post this as many have asked why the USA is not competing this time around.

Stay tuned for the little less than current news about the training camp in Seattle. 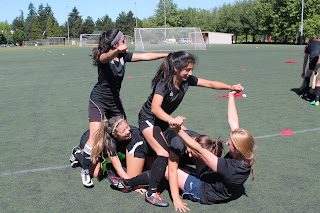