Training Camp with US Deaf National Team in Austin was a Home Run!


The US Deaf Women's National Team (USDWNT) has 2 training camps per year totaling 8 days.  That is all.  Thankfully, the team cherishes every second, cramming as much as we can in a few days; and this camp was no different.  The goals of each training camp are:

1.  Increase player pool:Invite, embrace and cultivate rookies to the team.

2.  Continue to improve as a team to win a 3rd Deaf World Championship.

3.  Seek opportunities to be a positive member of the community where camp is held.

1: Increase Player Pool to ensure success in the future.   ✔

We welcomed 3 new players this camp; Sophie, Ashley H. and Silvya.  Up to now, the team has 5 gold medal.  (3 Deaflympics, 2 World Championships) and has not lost a game in international competition.   The biggest reason behind the success is the leadership that is driven by the players.
Improving with each camp is important, but even more critical is allowing space for the rookies to take the reins and learn how to drive.  The vets on the team welcome rookies with respect and patience.  With ages ranging from 13 - 40-ish :) it's a unique situation.    WE asked a couple younger players (not to be named 👀) to pass out Chick-fil-A that had been donated & pre-ordered.  Sounds simple enough.  One would have thought they were trying to put a woman on Mars.

Realizing for the first time what a hassle some of these things are because they had always been on the receiving end.  A team of leaders is the ultimate goal.

First camps for the newbies can be intimidating.  Sophie has hearing aids that she can't wear during training to abide by the international rules.  She has taken them out occasionally while playing on her club team when the weather doesn't cooperate.  When I asked her how she liked playing without her aids, she replied, "At first its tough, but I like it because I can't hear the coaches." 😊   She's figured it out at a young age... coaching is overrated. 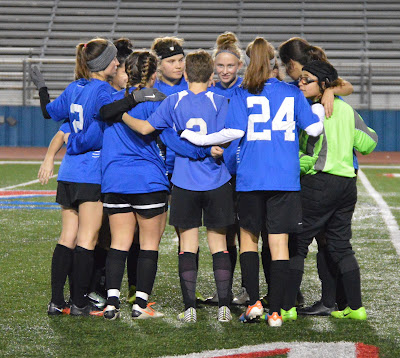 Sophie's eyes says it all.  Excited and Ready

Ashley and Silvya both fluent in ASL but not fluent in  Amy Sign Language.  A work in progress, Joy & I are far from being able to explain what we see and how to adjust. Or what we saw that caused us to clap gregariously.  With Amanda (interpreter) in tow it's a combo of ASL, charades, shouting and  chasing players and tugging on  players to move them into more adequate positions.  The veterans are used to "The Show" & have remarkable patience.  The newer players, afraid to make eye contact for fear I will try to coach them.  Eventually they are reminded that this is a National Team and improving is mandatory and they dive in and make their best attempt.  That's what we are all doing.  Being uncomfortable and vulnerable soon becomes the norm.

The contrast from the 1st to 2nd camp is extreme.  Middle school aged first-timers are uncertain of the expectations; intimidated by vets that have gold upon gold and have graduated from college and beyond.   Those same players at the next camp cannot wait to spill onto the field and be together regardless of any talent disparity.  Any chance to re-unite with other deaf players and play soccer seems to be the priority.  Age, race & skill level seems to go unnoticed.  Without a word or a sign, the shared experience of what these players have in common seems to allow for a memorable experience.


Tactically planned, our first meal was at Crepe Crazy.  A delicious spot owned and operated by deaf business entrepreneurs.  The place is always packed but the owners saved us a spot and donate 15% back to our team.
Mia gets the skinny from Crepe Crazy employee:

Mia inquires and finds out, "....about 15 years ago my husband, who is also deaf, accepted a job here, so my family, my daughter & son, moved here, well not HERE, but...."   Needed to throw that in there as an ASL class I am in just learned the signs for family members.

2: Continue to improve as a team to win a 3rd Deaf World Championship. ✔✔

A steady stream of new players and camps 6 months apart, makes it difficult to continue from where we left off.   However, this camp had to be one of the best in terms of soccer quality.  The team improved even with throwing in some new sessions and concepts.  Due to communication barriers, a new drill can be arduous.  This time when ears weren't on and signs went askew, players assessed, stayed focused and pushed through the pantomime of the session.  The focus was sharp.  Hallelujah!
(For those that are new to this team.  In accordance with international competition; all hearing devices must be removed for games; and that is how the team trains.  Therefore, some players that wear hearing aids or cochlear implants and have not learned ASL struggle to communicate with those that use ASL only. check earlier posts if ya' want to know all the scoop; its' incredible)

Another key factor in a successful camp was the help.  Katey Fawcett & Michael Harris drove from Oklahoma to pitch in once again.  They trained the keepers, played in, kept score,  made excellent equipment managers and kept track of all the equipment the University of Texas was kind to lend.

Thanks to Andy McClelland, Graham Smurthwaite and FC Westlake for giving up rare free time to help us with donated facilities & organizing a scrimmage under the lights.  A team full of quality respectful players is always great competition gives us a good indication of what to work on next. 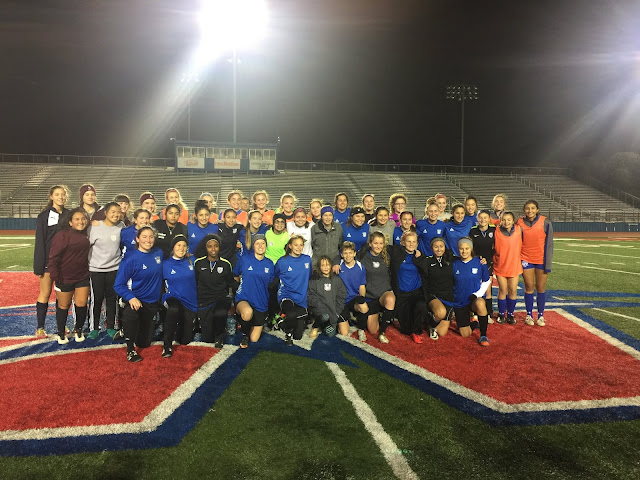 As much as I  hate to admit it, parents are also a big key to success, donating time, chauffeuring, and stepping in when needed.  I am the idiot that says, "Parents, it's best if you keep your distance and help the players bond, learn, deal with the team and organize themselves." Then... a mere hour later I am frantically texting, "Ummm, a car broke down, someone's flight is late, So and So needs new cleats..... I need your help!" Parents, ... can't live with 'em, can't leave 'em on a curb.

Abby Smith US National Team Pool GK and NWSL Goalkeeper came out New Year's Eve day in sub zero temperatures and put our GK's through their paces.  It made my heart happy to see Abby when  raise her goalkeeper glove high and offer help. Both Janet and I had the pleasure of working with her on the U20 National Team when she was a teenager.

Janet Rayfield also made a guest appearance on 2 occasions.  Not dressed for the freezing temperatures, she pulled her cowl neck over her face so her eyes were the only thing peeking out from the warmth.   As players piled out of the overcrowded van like a clown car, she nodded enthusiastically and said "Hi!, How's it going?" greeting each player.  The only thing the players could see were animated eye.  They kept their distance.  It didn't take long for the light bulb to turn on and Janet to jerk her cowl neck below her chin. Facial expressions are vital.  All of a sudden the joyful "welcome" got the response it deserved;  a returned grin and confident high 5 as they entered the field.

Janet watched with a trained eye; impressed with the level and enamored be re-thinking the game from a deaf perspective.    How do you stop a practice to give helpful input?  How do you tell someone they have a player on their back?  How do you get a concept to the team as efficiently as possible?

Janet's sound advice for ALL players at every level

3.  Seek opportunities to be a positive member of the community.✔✔✔

Connecting with the soccer and deaf community wherever we land is a highlight of camp.  Normally we visit a school and show our medals and run a clinic for the kids, but the Texas School for the Deaf was closed for the holidays.  This time, one special girl named Malia managed to fly from Boston to meet the team.  Malia is 9 and a soccer nut.  When she was 2 she was diagnosed with neuroblastoma.  As a result of treatment, Malia lost much of her hearing and now wears hearing aids.  She wears hearing aids after some arguing, coercing and bribing from her folks.  She didn't like how they looked or felt & didn't want kids staring at her at school even if it was out of pure curiosity.  Her dad learned of the team & flew out to Austin with Malia to meet the team.   Malia met successful, confident players that served us the ultimate role models.  We had told the team she would be our honorary captain for the week and they were pumped to have her lead the team. 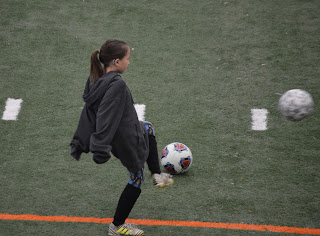 When we first met she and her dad in the hotel lobby, you could tell she was a player.  Expectedly shy with 22 faces welcoming her, it was difficult to get that first grin.  But when she stepped on the soccer field things changed.  Running, smiling, sprinting to get every stray ball, jumping into a warm up game or simply watching.

Day ONE Malia wore her hair down, efficiently covering her hearing aids.  Day TWO: Malia's hairstyle was the highest, tightest pony tail I had ever seen.  Look at me!  I am just like you and it's awesome!


By the end of camp Malia had touched everyone's hearts with her combo of courage, love of soccer and being a really great girl.  An unspoken pact formed with the group.  A hope that someday Malia finds herself wearing a similar red white and blue jersey.

Tough to find the perfect New Year's Eve setting with a group of 28 raging in age from 9 to 52. :) Somehow the Sparkling Cider,  Olive Garden Take Out and cupcakes, hide and seek with Malia in the lobby of our 2.5 star hotel completed 2017 perfectly.  A Home Run on all accounts.


Next camp.  This summer.  When? Where? TBA, but possibly on a Dairy Farm, where the accommodations include some Elbow Greece and Work Ethic 101 to the tune of a 4:30 am wake up calls to caring for calves, cooking cleaning and soccer.  Sport is life. :) Building leaders one chore at a time.
If we pull it off, one can only imagine what we are going to "step into" on this adventure!

Thanks to all who donated time, miles, money, points, energy to make this camp a great experience and affordable for the players.

If you would like to learn more about the team, please go to the following links.  Most of the newer players that found out about the team is due to social media outreach. 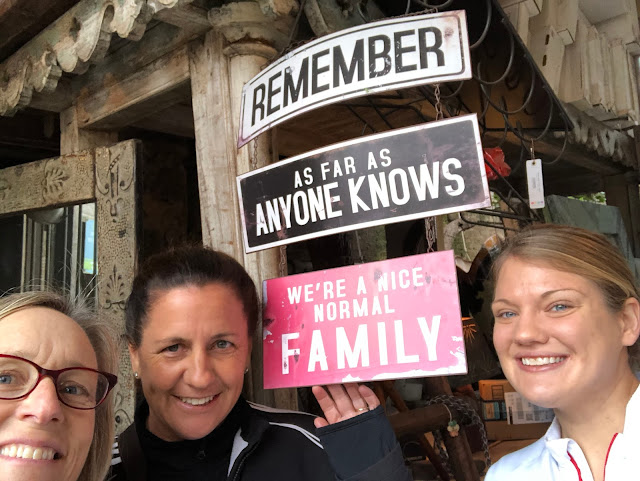